The Spelheim Royal Guard is responsible for the protection of the realm's ruling family of Queen Qetesh and Prince Meru.

The Guard dresses in a service uniform consisting of long golden-silvery cloaks as well as large ornamental headpieces. The cerenomial outfit conceals the set of light body armor beneath them. Some discard the outfit in the field altogether, as to allow a great freedom of movement.[1]

A Saurian royal Guard, Third Sun, accompanied Prince Meru on an ill-fated mission to Midgård.Caught between the Matriarchate Civil Forces and Crystal Guard cultist, he was shot by feline sniper.[2]

The Guard is divided into two watches, or halves the "Moon Watch" and "Sun Watch" Each halve numbers precisely six individual members at any given time. The members of the watch are named numerically in accordance with their halve, for example "Third Sun" and "First Moon" [3] [4] 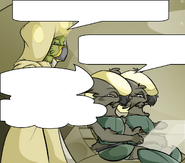