View source
watch 01:36
We're Getting Mutants in the MCU - The Loop
Do you like this video?
Play Sound

The Ibis Royal Pilots are an order of a carefully selected pilots in the service of the Spelheim's Royal court. They are tasked to escort high-level dignitaries and member of the royal court, as well as to operate its airships, specifically the Shu-class Courier Ship.[1]

Royal pilots operate in pairs of two, being trained to represent the Queen Qetesh and Prince Meru. They wear green flight suits and greaves, as well as black belts and yellow helmets. Selection criteria includes a prior spotless service record, as well as physical similarities between the pilots assigned to their respective ships.[2]

At the outbreak of the Great Race War, two Royal Pilots piloted a Shu-class Courier Ship to Midgård with Prince Meru onboard. After making a landing into the city, two pilots stood with the ship as Prince Meru left to search for the Matriarch.[3]

Pilots were organized into pairs of two and assigned to operate a single ship in rotational basis. As an organization, they answered directly to the Queen Qetesh and crown Prince Meru.[4] 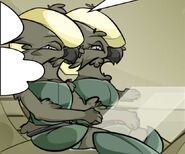 Royal Ibis pilots at the controls of the Shu-class Courier Ship.